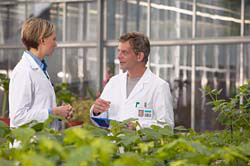 A published study from the Horticultural Research Institute in Washington, D.C. showed that transplant shock following the transplanting of large trees can be minimized by applying a combination of selective pruning and irrigation with Treegator® Slow Release Watering Bags.

"During the first 2 weeks of April 1997, 24 field-grown Acer trees (12 Acer truncanum / Trident maple and 12 Acer tataricum ginnala / Amur maple) were transplanted using a 45 inch tree spade. This was prior to leaf emergence.

Trees were moved approximately 492 feet to a blocked study site. Three trees of each Acer species were also left in the original nursery rows as non-transplanted controls.

All trees were irrigated for the three days immediately following their transplant, using Treegator® Bags (Original model). After this initial watering, three trees of each species were randomly assigned to one of four treatments.

Treatments were transplanted control, top pruning, water (provided by Treegator® drip irrigation) and water combined with top pruning. By using a combination of leaf area index and transpiration rates, Acer (maple) trees that were selectively pruned and irrigated with Treegator® (Slow Release Watering Bags) exhibited less transplant shock than those that were only pruned or not pruned but were irrigated."

Excerpt above adapted from:
Journal of Environmental Horticulture 18;202-206 December 2000

A published study by Bert Cregg with Michigan State University Department of Horticulture compared soil moisture, survival and growth of street trees with and without Treegator®, as well as compared the incidence of vandalism on Treegator® Bags in diverse neighborhoods in Lansing and Detroit, MI.

"In cooperation with the city of Lansing and the Greening of Detroit, we installed Treegator® (Bags) on 27 trees in each city. City of Lansing or Greening personnel filled the TreegatorÂ® Bags periodically through the summer. They also hand-watered 27 trees in each city. In Lansing, 27 trees were not irrigated. In each city, the trees were divided among three neighborhoods and irrigation treatments (Treegator®, hand-watered or control) were assigned at random to trees within a neighborhood.

From the data to date, we conclude that the likelihood of vandalism to Treegator® (Bags) is relatively low (less than 4 percent overall) across a range of neighborhoods in Lansing and Detroit. Watering with the Treegator® (Bags) can improve soil moisture deeper in the (soil) profile than watering by hand."